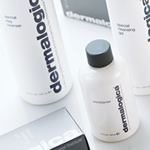 However, whilst you might be following these three important steps, if you’re not using the best products for your skin, you could be doing more harm than good.

Whilst toning and moisturising are both undoubtedly very important, as cleansing is the first step in your skin care regime, you need to ensure that the product which you’re using is fit for purpose.

Using a cleanser which is less than ideal for your skin type can have several negative benefits, some of which are covered below…

Using a cleanser which is to harsh for your skin could leave it feeling ‘tight’ and incredibly dehydrated. Not only can this make skin look and feel less than its best, but extreme dryness could also cause premature skin aging.

At the other end of the spectrum, using a cleanser which clashes with your skin could contribute to excess oiliness- which could prove difficult to control throughout the day.

A cleanser which isn’t effectively shifting oil, dirt and other skin debris could lead to breakouts and blemishes- and it’s fair to say that no one wants to be graced with these.

These are just a few common consequences of using an unsuitable product, and for the very best in cleansers- for every skin type- look to Dermalogica and their unbeatable range.